Real Madrid will face off against theri eternal rivals Barcelona in what could be a season-defining El Clasico in the 2020/21 La Liga this weekend.

Matchday 30 of the 2020/21 La Liga brings with it one of the biggest matches of the season as reigning champions Real Madrid get set to lock horns with arch-rivals Barcelona at Estadio Alfredo Di Stefano on Saturday night, in a contest that could have major repercussions on the title race.

Real Madrid head into Saturday’s game high on confidence after making light work of Liverpool in the UEFA Champions League earlier in the week, following their comfortable win over Eibar in La Liga at the weekend. They are now 12 games unbeaten across all competitions, sitting third in La Liga, three points off of leaders Atletico Madrid.

Barcelona, meanwhile, may have been eliminated from Europe, but are the form team in La Liga. Following their 1-0 win over Real Valladolid on Monday, the Catalans are now 19 games unbeaten in a row in La Liga and are just a couple of points below Atletico Madrid and one above their Saturday’s opponents.

With Atletico Madrid having dropped points against Sevilla last week and facing another extremely tricky fixture against Real Betis on Sunday, the winner of the El Clasico could end up gaining a major advantage in the race for Laliga championship.

The reverse fixture months ago in 2020 saw Real Madrid win 3-1 with goals coming from Federico Valverde, Sergio Ramos and Luka Modric while Ansu Fati netted the sonly goal for Barcelona. Ahead of their latest meeting on Saturday night, BraggsSports takes a closer look at both teams.

Real Madrid continue to plagued with roster issues across the board as key men Sergio Ramos, Dani Carvajal, Raphael Varane and Eden Hazard are all unavailable for Zinedine Zidane once again on Saturday. Given their exertions in midweek and the second leg tie coming up against Liverpool, the manager would have ideally liked to make changes but cannot afford to do so give the importance of the game.

Thibaut Courtois will once again be the man in the goal for Real Madrid, protected by the centre-back pairing of Nacho and Eder Militao, with the latter being quite impressive in the last couple of games. Lucas Vazquez and Ferland Mendy should be the two full-backs who will have their task cut out on Saturday, dealing with the marauding Barcelona wing-backs.

Casemiro will sit the deepest in the middle of the park for Los Blancos and look to keep Lionel Messi quiet as he is usually task with that role while Luka Modric and Toni Kroos, who was in sublime form against Liverpool, will take up the remaining two slots in central midfield to provide the forward thrust and creativity for the home team.

Marco Asensio has hit form at the right moment for Real Madrid and should be a certain starter on the right-wing while Vinicius Junior’s display against Liverpool should guarantee him a starting berth on the left. Leading the line for Real Madrid against Barcelona will be ace goalscorer Karim Benzema.

A huge boost for Barcelona as key men Gerard Pique and Sergi Roberto have been passed fit and have been included in the squad by manager Ronald Koeman. Philippe Coutinho and Ansu Fati, however, remain unavailable for selection. 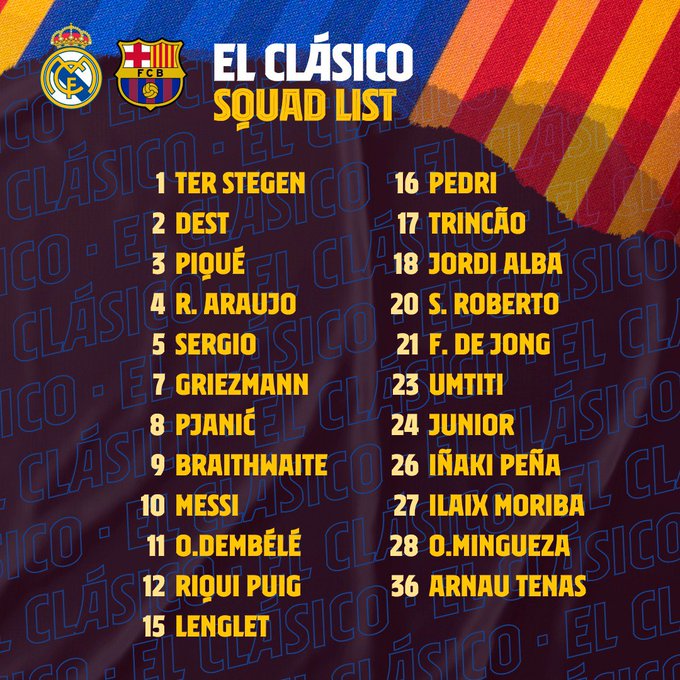 The switch to the three-man defensive system has worked guite well for Koeman so far and he is likely to stick by that formation in Madrid with Marc-Andre ter Stegen lining up in goal, shielded by the backline of Oscar Mingueza, Clement Lenglet and Ronald Araujo. This means Frenkie De Jong will have to shift back to midfield.

The Dutchman, who will be tasked with providing Barcelona with the attacking impetus, ought to have Sergio Busquets and Pedri for company in the centre of the park. Sergino Dest and Jordi Alba are the undisputed starters as the wing-backs, having looked dangerous in the past few games.

Moving de Jong from defence to midfield means Barcelona will have to cut one attacker from the lineup on Saturday. Captain Lionel Messi is a certain starter, whereas Ousmane Dembele deserves a starting berth on the back of his recent impressive form, meaning Antoine Griezmann is set to miss out on the starting XI against Real Madrid.

Both teams are in good nick coming into Saturday’s game and will be pushing for all three points with the title on the line. While Barcelona would have had the advantage given the number of important players out for Real Madrid, Los Blancos showed against Liverpool that they remain a force to be reckoned with even without Ramos, Varane and Co.

Fatigue might become a factor for Real Madrid but Zinedine Zidane’s side have shown great resilience in recent games. And with Ronald Koeman’s Barcelona also on solid footing currently, this could very well end up in a scored draw.

However, BraggsSports predicts Barcelona to go home with all 3 points in a 2-1 away win.

Why Ronaldo de Lima has an underwhelming CL goal tally

How it unfolded in some of Europe’s leagues this weekend

Who is Bayern Munich’s Bright Arrey-Mbi?

Has Barca got a new recruitment system?

Have long term football managers truly gone out of style?

How to Rank World Football Leagues